What exactly are you looking at? 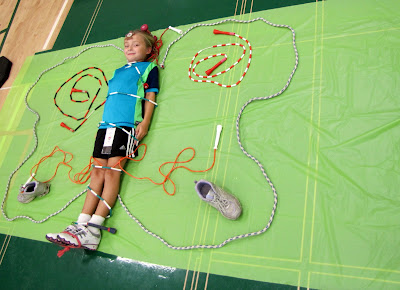 It's a butterfly...no doubt about it! A butterfly that won first place in a competition with this entry over the weekend...a butterfly that even had a smile for this photographer.

Emme was in a competitive skipping competition on the weekend...about a half hour drive from here. Since it started early Saturday morning...and was slated to go until late afternoon...I thought I would pop by after lunch and see some fabulous skipping. How disappointed I was to find there was only one event left when I arrived...and that had little to do with skipping and everything to do with art. (That is to be expected when the event is held in a school bearing the name of Robert Bateman...Canada's acclaimed wildlife artist.)

The one and only event that I witnessed was a fun event to end off the day...where each team sent four of their 'skippers' to use the materials they were given (mostly skipping ropes) to create a replica of a person, insect or animal of their choice on the assigned canvas. Emme's team really 'thought outside the box'...and discovered she fit 'inside the box' and so they used her in their creation. The judges had no trouble in awarding the first-place trophy for the mystery event to Emme's team.

That being over...I stayed for the award presentations for all the events that I had missed. There were skipping teams entered from various parts of British Columbia and some from the USA...and these kids really know how to skip. I sure wish I could have seen them in action! But instead, I watched them receive their ribbons...and cheered them on.

I was thinking it was sort of like having dessert...and missing the main course. But next time...I'll be sure to have the 'full meal deal'!

I'll just leave you with a few images of the life-like wolves that lined the walls of the gym. 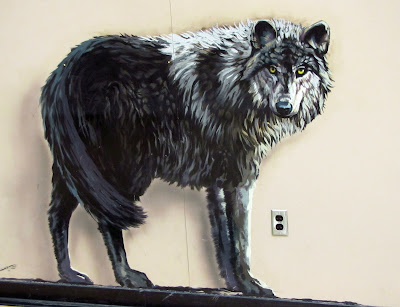 I don't think Robert Bateman himself would be painting on gym walls... 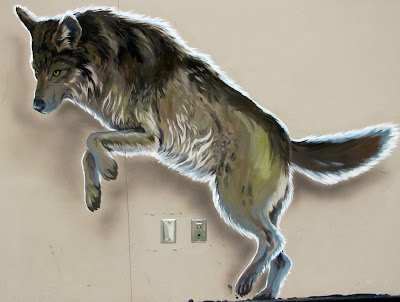 ...but someone really knew how to make them look real!

Tomorrow...it's back to the Pacific Coast Highway...and a tour of Hearst Castle.

Have a great Monday...