We've been...we've seen...we've cheered...we've immersed ourselves in the excitement that was the 2010 Olympics. It will all be coming to an end soon...but it has been the experience of a lifetime. Hosting the Olympics has made us proud of our country...and has fostered goodwill between many nations...something which has been so special to be a part of. 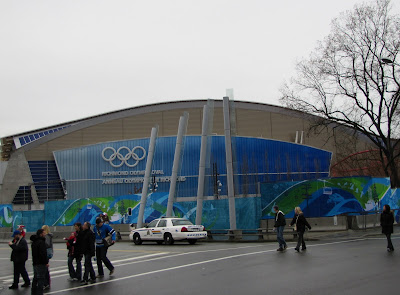 Yesterday we made the trip out to the acclaimed Richmond Oval to watch long track speed skating. When we bid on these tickets nearly two years ago...it was as much about seeing the venue as watching the event. 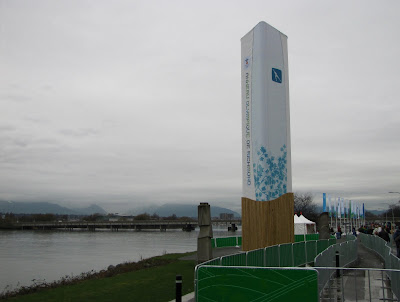 The Richmond Oval is situated along the banks of the Fraser River...not far from the Vancouver International Airport. The glassed northern side of the building provides spectacular views of the river and the North Shore Mountains on a clear day. Yesterday was an umbrella day! I came with my new Olympic 2010 black umbrella...and I came home with NO umbrella. Umbrellas were not allowed inside the venue...and could be retrieved from security on exiting. It seemed someone wanted a souvenir...and they are now enjoying my umbrella. 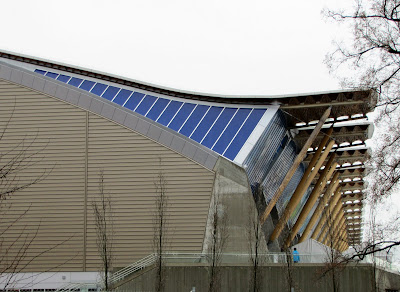 Back to the oval....the roof of the building was designed in the shape of a heron's wing...though one would have to see it from the air to take it all in. The roof is one of the longest clear spans in North America... 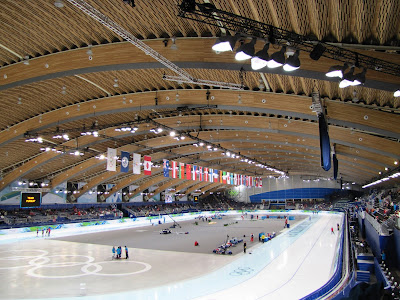 ...and includes one million board feet of B.C. pine-beetle kill wood linked together in a way to create a rippled effect. This one of a kind roof...and specifically the use of the pine beetle wood...resulted in the Oval receiving an award of excellence in architectural innovation by the Royal Architectural Institute of Canada. 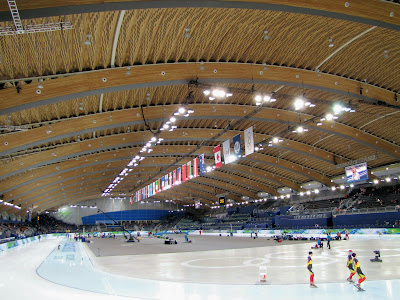 After the Olympics, the Richmond Oval will be converted to a multi-use sport facility that will include two Olympic-sized ice rinks...up to eight hardwood ball-sport courts...a gymnasium...a 200 meter track...a rubberized turf area...and a high performance centre for elite athletes. Think BIG! The speed-skating oval will be covered with removable flooring and could still be used for competition. It will be a lasting legacy of the Olympic games of 2010.
The specific event we had tickets for...was the team pursuit qualification finals...both men and women. Though I took many photos...of all the different teams...and they are all amazing skaters...I'll leave you with a few pic's of my favorite teams. Those were the ones dressed in red...of course! 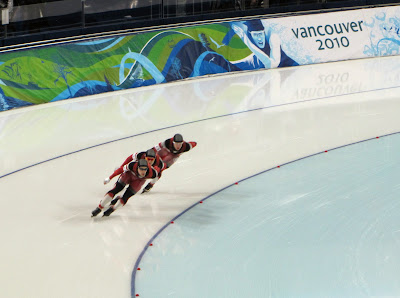 These three went on to win the first ever men's medal in speed skating for Canada...and a gold at that. We watched both the men's quarter-final and semi-final heat...and the Canadian guys managed to break the standing Olympic record both times. They skated as one...at speeds that are hard to imagine. I'm so glad they were able to go all the way today. 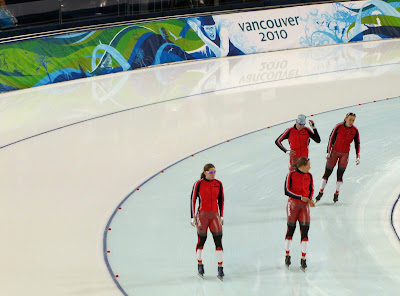 Then the girls had their warm-ups...how fun to see some of Canada's top female skaters on the ice...all at one time. Kristina Groves, Christine Nesbitt, and Brittany Schussler...and our hero from the last Olympics...Cindy Klassen. Cindy did not skate in the heat we watched. 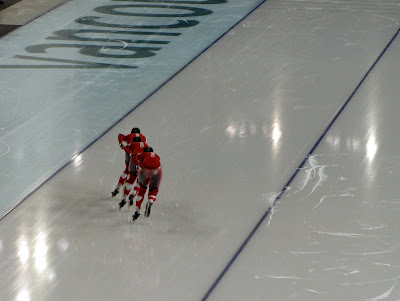 Canada was paired with Team USA... 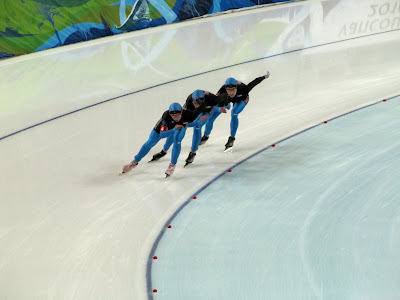 ...and ended the race 2/100ths of a second behind. Despite an amazing skate...their team pursuit dream ended with this race.
Though the stands were predominantly red.... 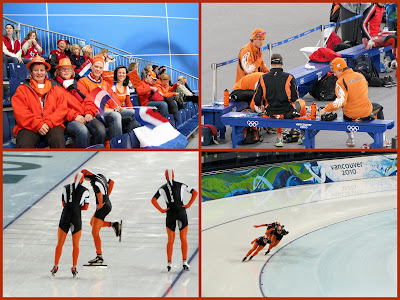 ...there was a large contingency of orange throughout the venue. Speed skating is a Dutch favorite...and Team Netherlands had an enthusiastic and noisy fan club. The Holland Heineken House is situated nearby...and is the home away from home for all Dutch athletes and fans. And guess how they get around? 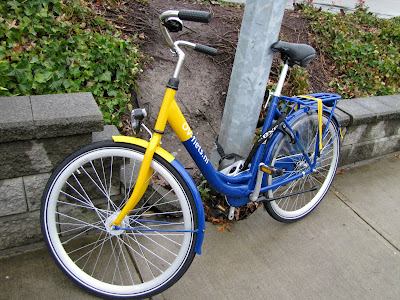 Holland's national railway sent over 400 bikes to be used by athletes and officials of the Heineken House during the games...at no cost. They are using the same mode of transportation to which they are accustomed back home...and many are trying out the new Richmond bike trail. They are easily spotted...they all wear orange! 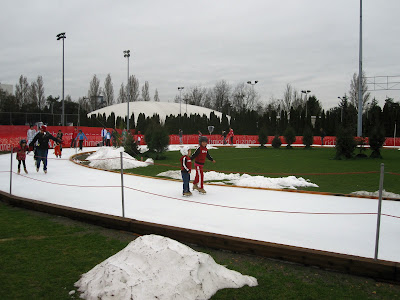 While we were in the neighbourhood...we stopped by Richmond O-Zone...watched families skating on the outdoor ice rink...and did a quick tour of B.C. Street. 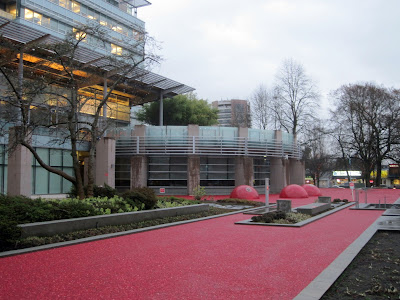 The Richmond City Hall is worth stopping by... 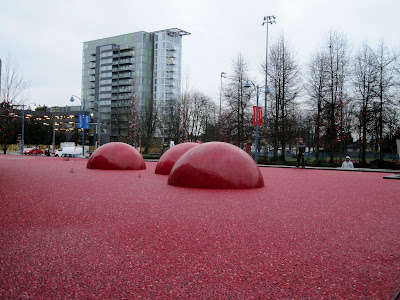 ...just to see their display of floating red cranberries. Cranberries represent the largest agricultural crop of the area...and are a part of the 'paint the town red' campaign. In the park next door are the Olympic rings...also filled with floating cranberries...and a huge maple leaf of formed with a sea of cranberries.
Tomorrow will see the games come to a close...and we will be left with only memories...good ones.
The view from 'my front porch' will be very different for the next while...and will look more like the picture you see on my header today. I will be taking a blogging break for awhile...but when I return...I will be giving away a pair of the coveted red Olympic mittens. It seems hubby doesn't covet the ones that were intended for him. Leave me a comment...tell me what you enjoyed most of the winter games...and I'll have a draw once I'm back. Should your name be chosen...you will be in good company...as over three million pairs have been sold. 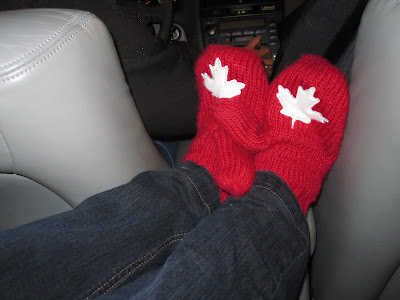 And if you don't really care to wear mittens...they work as foot warmers as well...I noticed!
I'll be missing you...