Ready or not...the games are about to begin. 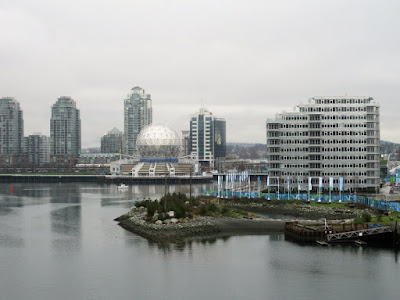 What fun we had spending a little time in the city...and catching Olympic fever! 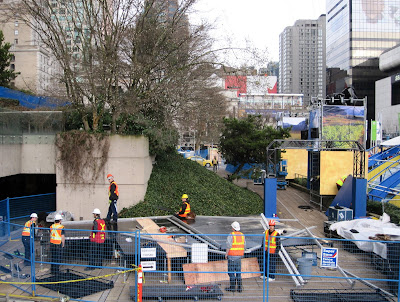 I'm thinking they will be totally ready...by the end of next week. But everywhere we looked the crews were busy...building stages...removing graffiti from existing structures...polishing eagles...and what have you. You know how it is...before the company arrives...there's always lots to do! 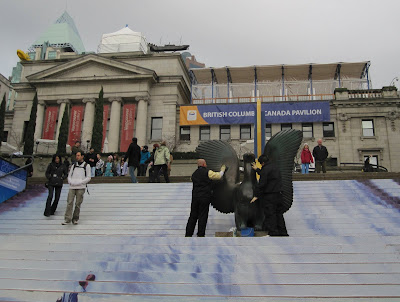 From Robson Square one can look up at the art gallery...and see the eagle polishers hard at work. Though we may have no snow...and none in the forecast...the decals on the stairs make a lovely snow scene!

Many of the large downtown buildings have been totally transformed for the Olympics. 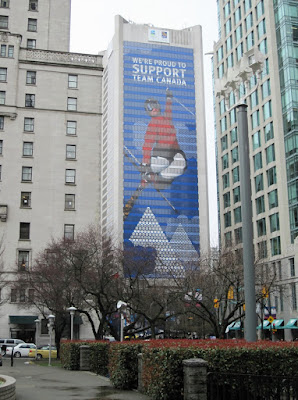 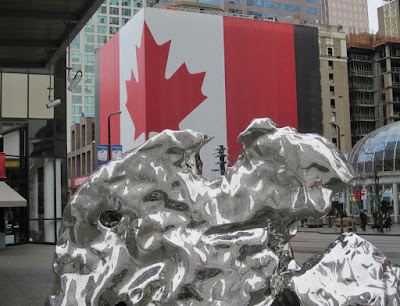 ...and around every corner they've been busy painting the town red.
Most everything we did while in the city was free (other than eating). Most of the pavilions won't open until the games begin...but the northern Canada pavilion was open to the public...so we took that in. We learned a lot...about Canadian diamonds...and the beauty of the far north. 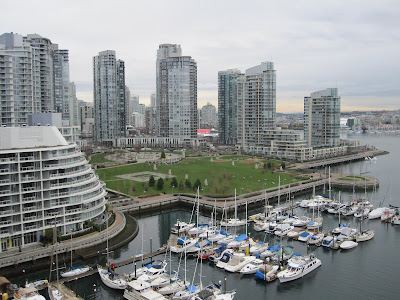 We walked the Granville Street Bridge to Granville Island...where I'll take you on another day. 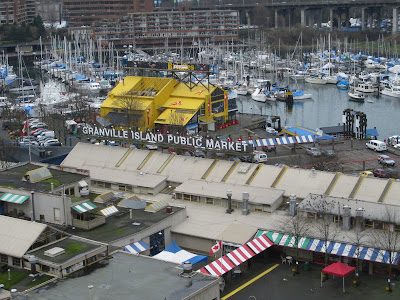 Water taxis and RCMP boats were the only vessels out and about on False Creek yesterday morning. 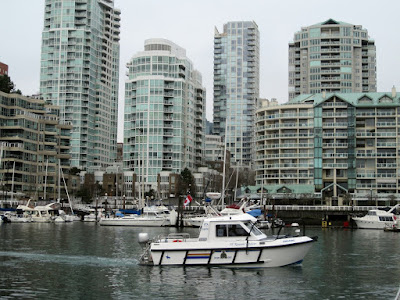 We saw RCMP officers arriving by the busload from back east...and noticed police vehicles at every turn along the way. We chatted with a friendly young officer from Montreal...who is quite happy to be stationed in balmy Vancouver for one month...and being housed on a cruise ship. Seven thousand police officers are being brought into Vancouver for the games.

The new Olympic Line has been running for some ten days...and it's free... 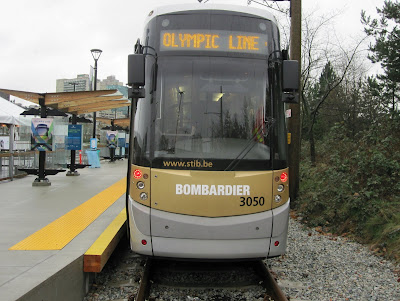 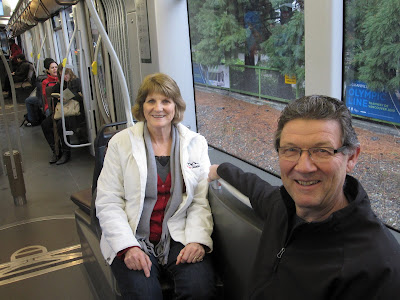 It's a Bombardier streetcar...here from Brussels, Belgium for the duration of the games...and runs along tracks that were once part of the CPR line.

We exited the Olympic Line right near the Athlete's Village...and had a peek from afar. 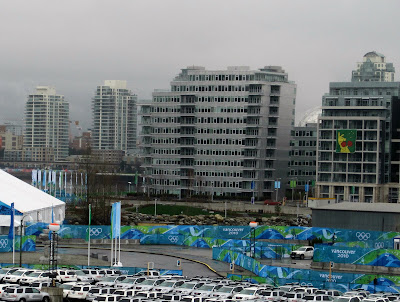 We wondered about the kangaroo flag flying from the eighth floor of one of the buildings...and learned later that the Australian athletes unfurled their flag just this week. Who knows what VANOC will make of that!

We walked...for miles. It really is the best way to experience the city! And there's no better way to meet the people. The chances of meeting anyone we know in Vancouver aren't that great...since we don't really know many people who live there. What a surprise to meet a friend on a street corner in Yaletown...a friend who moved to the city a few years ago to pastor an urban church. We happened to be right in his neighbourhood! 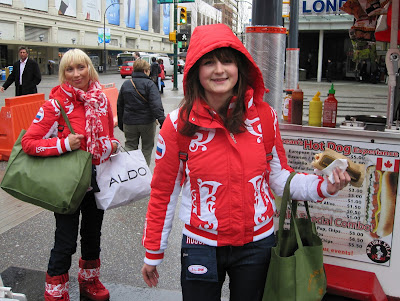 And then we met these two gals...who were having the time of their life. Home for them was Moscow...but they heard there was a party in Vancouver...and so they came to check it out. From the hot dogs...to the hospitality...they gave Vancouver a good score. 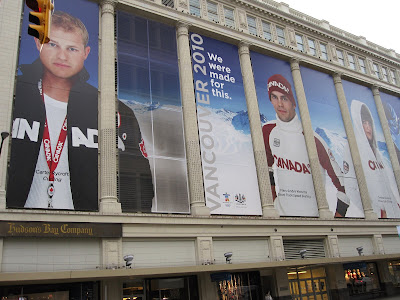 And of course we checked out the Hudson Bay Company...official sponsor of the 2010 games and the best place to buy souvenirs of any kind.
Towards evening... 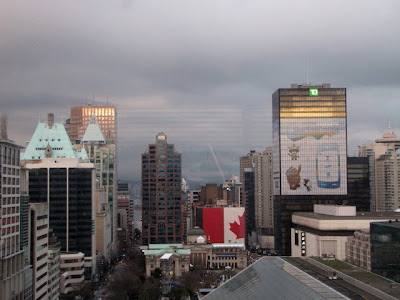 ...we made our way towards the waterfront...and Canada Place. Everything looks so different at night. 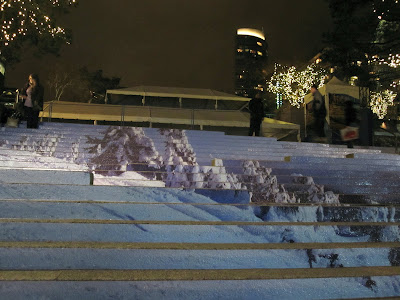 I knew the snow on the stairs was the work of an artist... 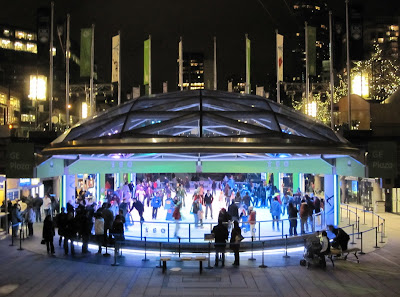 ....the ice nearby was the real thing. The ice rink at Robson Square is open to the public...and always a hub of activity...after being closed for a decade. It has been renamed GE Plaza for the Olympics...which will also house an International Media Centre just next to the rink during the games.

The lantern forest on Granville Street... 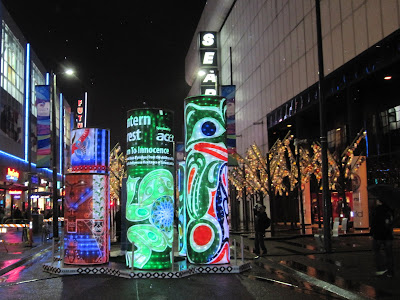 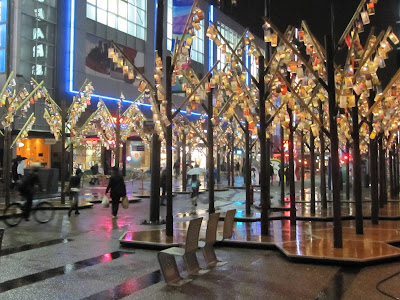 School children from Canada and Taiwan have joined together to create the lanterns...2010 of them hanging from forty steel trees. 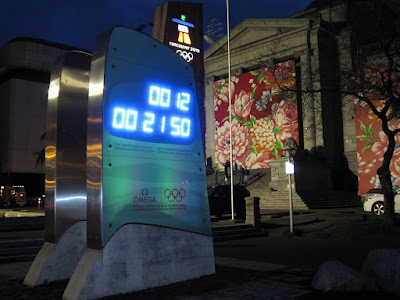 The official Olympic countdown clock is situated in front of the art gallery...with not much counting left to do! 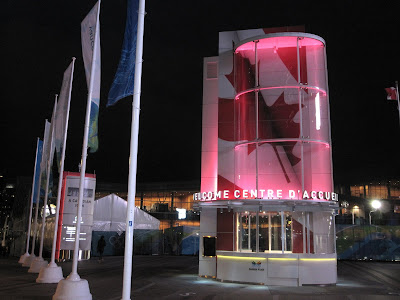 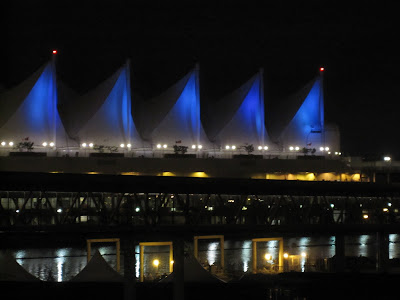 We checked things out...from a distance... 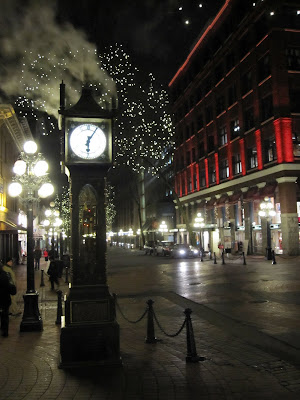 ...and carried on to the historic Gastown area and dinner at the Old Spagetti Factory.


That's it for today's tour...but we will return!
Have a wonderful day...