so who lit the flame?

The games are on! And we couldn't let them start without a celebration of our own. It's always more fun watching a big event surrounded by friends...and so we planned an 'opening ceremonies' party for Friday night. The friends who kindly hosted really got into the spirit...and fabricated a set of Olympic rings to decorate their home. The International Olympic Committee has not yet come calling to have them removed...and they are quite a hit in their neighbourhood! 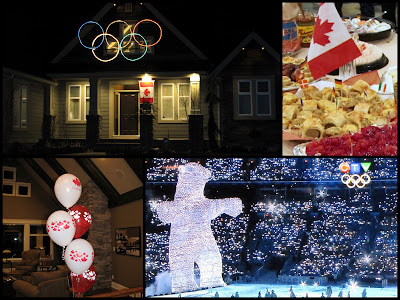 Since the opening ceremony started at 6 o'clock...which is about the time some people arrive home from work...the party was planned for a little later. The opening ceremonies were all recorded on PVR and so we just watched them slightly delayed. A great system...failproof...especially since it is easy to fast-forward through any or all commercials.

There were some thirty of us gathered around the big screen...making frequent trips to the buffet table...and enjoying the fabulous show taking place in Vancouver. The big question for some time has been...'who will be the final torch bearer?' It was top secret...and so we waited for the grand finale. How thrilled we all were to see Rick Hansen...the Man in Motion...bringing the flame into the stadium. And how special to involve some of Canada's finest Olympic athletes in joining together to light the torch. We watched as the four of them approached centre stage...and then we waited...and suddenly it seemed like something must not be going according to plan. Steve Nash looked uncomfortable...Nancy Green Rain waved at the crowd...and the CTV announcer informed us that there seemed to be a problem with the Olympic cauldron's hydraulic system. Now we were all getting a little anxious...as the seconds ticked by.

And at that very moment...our pre-recorded PVR program ended. The recorder had been set to record the scheduled program...but the opening ceremonies went overtime. NO! So there were were...all wondering if the Olympic torch actually got lit...and who had the honours.

After all that build-up...the last chapter was missing! We quickly resorted to the internet to determine that the flame was indeed lit...and that Wayne Gretzky had the honour of carrying it the final leg of the journey. Good choice...don't you think?

What a memorable evening it was. Good food...good friends...and a celebration that had no ending!

I must say that we have enjoyed watching the first few days events...especially seeing Canada get it's first gold medal last night! The CTV coverage has been excellent...and we are appreciating the PVR recorder we got from the kids for Christmas. We can record one event while we watch another...how neat is that? Oh yes...and we are remembering to add extra time to any important events...since they may just go overtime. Smile.