Sunshine in spring means it is a busy time on the farm. The guys were anxious to get all the grass off the fields...and had extra help lined up for Saturday. My job was to provide lunch...much preferable to driving tractor...in my opinion. 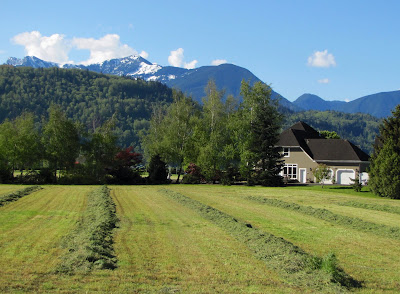 I grabbed the camera in the morning and went outdoors...thinking I might capture the feeling of spring on the farm (minus the smell of freshly mowed hay). I noticed cars coming and going at the neighbour's...and saw a garage sale sign...and thought there was still plenty of time to make lunch later...so I wandered over. I found many treasures...including the 'Muffins and More' cookbook that I once owned. I bought an antique picnic basket...just to take all my goodies home. Oh...and for neighbours...everything was half price. Here's the sad part...the garage sale is in preparation for a move...and we will miss our good neighbour when that time comes. 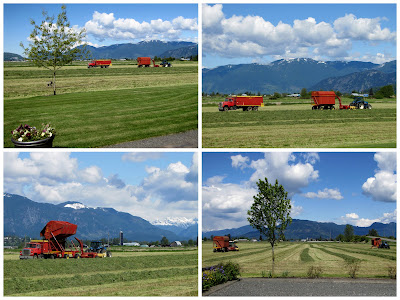 The trucks were coming and going behind the house all morning...and I suddenly realized I might have to speed things up a little if they were to have lunch at noon. First-cut grass harvest always includes a meal of watermelon and rollkuchen...with barbecued smoked sausages. 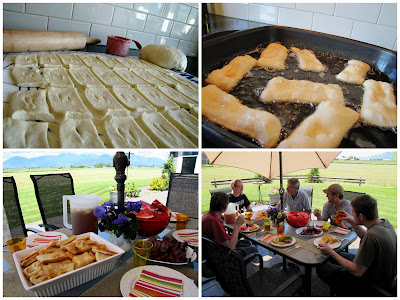 It was ready (barely) and waiting on the back patio when the crew arrived.

While everyone was busy out in the fields...the girls (my grands) were back to their favorite past time on the farmyard. 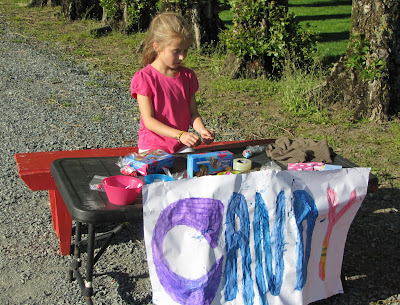 They were setting up shop once again...with hopes of luring customers to their roadside candy stand. Where once it was just Emme & Spencer... 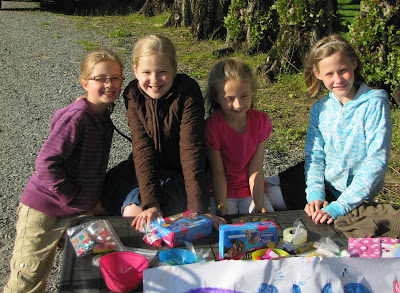 ...they have recruited and trained some excellent neighbourhood help. The first year...it was mostly Grandpa who bought candies....and he was required to climb up to their treehouse to make the purchases. Last year...they set up regularly on the backyard...and expanded their clientele to include all farm employees and anyone who happened to drive into the farmyard. This year the candy shop has moved again...and is now situated right near the road. They are hoping to capitalize on drive-by traffic...and actually had some success on Saturday...their opening day of this season. Don't count on any bargains...if you plan to visit their shop. I think it's the big smiles and the good service that bring customers back...year after year!

Thankfully they had relocated their business this year...as a candy shop under the weeping willow tree would have been disastrous. While the girls were tending their shop near the road...there was a very loud explosion...as half of the ancient willow tree in the backyard came crashing down. 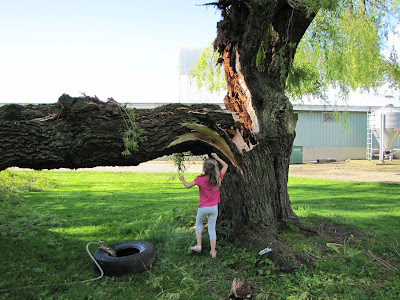 Neighbours came running to see what had happened...some thought they had heard a gunshot. I am so glad the girls were selling candy...rather than swinging on the tire swing...which now lies on the ground. 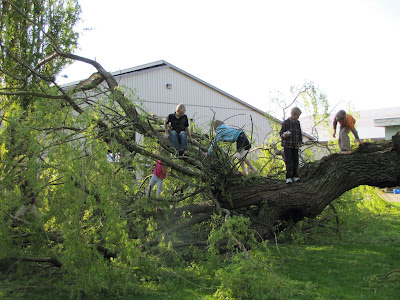 They soon abandoned the candy shop...when they realized they had the very best playground in the neighbourhood! Even the boys showed up to play. 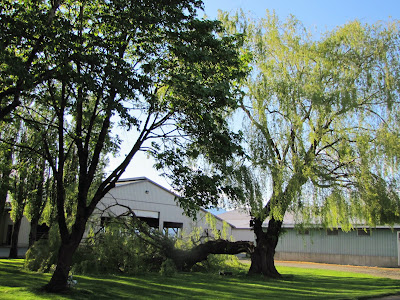 I'm quite sad about the weeping willow tree...even if I no longer live on the farmyard. It was there when my parents bought the farm...more than fifty years ago. I have a circa 1940's photo of the original farm given to me by someone who lived there long before I did...and the weeping willow tree was already there. We have had it pruned on occasion...but now it will coming down completely. It will be missed...especially by those who liked to swing from the branches and have snacks in the shade!
Have a great day...