Forty years ago in May...I was still in high school...preoccupied with graduating and camping trips with my friends.  Hubby was a few years ahead of me...had joined the work force...and had friends who were getting married.  On May 16, 1970 he was a groomsman at the wedding of his good friend (and cousin)...a couple who later became my good friends as well.  Through the years we have shared many wonderful experiences...camping trips, bike rides, hikes, a vacation in the sun, weekend get-aways and many delightful dinners around the table.

They celebrated their 40th anniversary on Sunday...and hosted a barbecue for friends and family in their back yard.  The thing is...they had no idea they were having us in.  And they never recognized us when they arrived home....and found us all waiting on their front lawn! 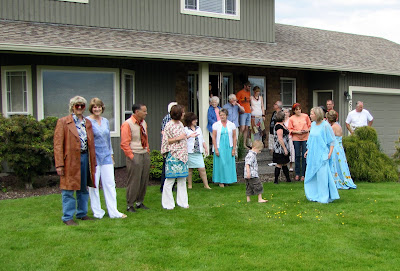 Planned by their kids...who knew mom and dad would be away on a motorbike trip that day...we were instructed to come in seventies clothing.  Well...that was rather a stretch at our place...and so I found some of today's clothing that looked much like what I wore back in the day.  Hubby wore a costume provided by our son-in-law...complete with a wig...which was soon discarded and lay like a sleeping cat under the chair all evening.  Let's just say I know he never looked like this in the 70's...but maybe someone did! 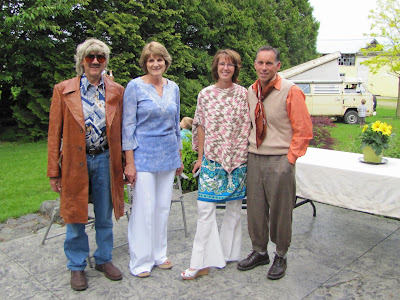 Oh...let me tell you about our friends in the photo above.  We've actually just become friends...since Lovella and I met in blogland a few years ago...and we soon discovered we were almost related.  And so...they came in their seventies clothing to their uncle and aunt's anniversary party...and we arrived at our friend's/cousin's celebration...and we had a fun evening together!  The funny thing is...we sat on that same patio together at a 25th anniversary celebration some fifteen years ago...but don't recall ever meeting at that time. 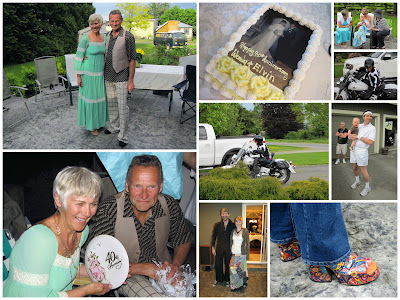 It was such a fun evening...remembering the days gone by...and celebrating a marriage that has lasted for forty years. 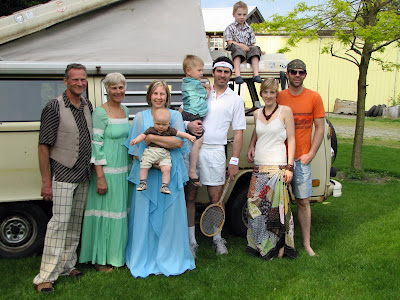 And of course there should be a family picture to mark the occasion...as John McEnroe won't likely be back anytime soon! 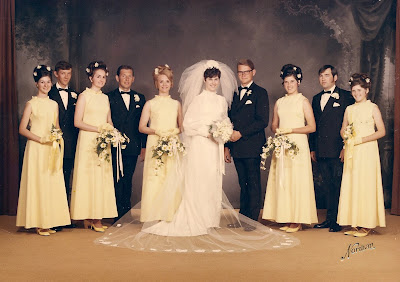 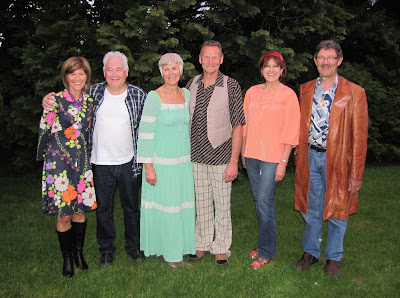 The wedding party (minus a few)...May 16, 2010.
We took them by surprise...and helped them celebrate their first forty years of wedded bliss.  With God as their Guide...and the support of family and friends...they look forward to what the future has in store for them as a couple.  Maybe we'll be back for another party...in ten years?  I'll mark it on my calendar!