The song was sung...the flowers have long since wilted...the cake is a distant memory...and I have all but forgotten that I am a year older...but it seems that my birthday still needed a little celebrating, and so we looked after that over the weekend. 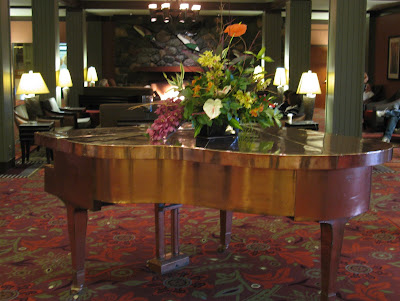 Three weeks ago, we had reservations for a little retreat at a lovely resort right close to home...with plans to celebrate my birthday. As it turned out...our son was very sick with pneumonia at the time...and so we postponed our getaway. By now, hubby was thinking we really needed a little break...since he had not had a day off in over a month!

And so, we rescheduled our stay at the Harrison Hot Springs Resort...and had a most wonderful mid-winter retreat. The family all joined us for brunch on Sunday...and just happened to bring their swim gear along. 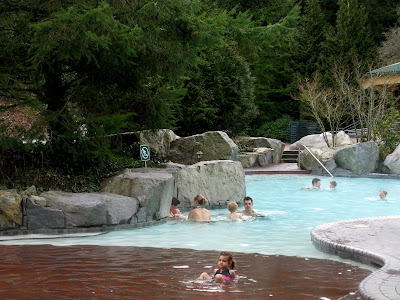 With a choice of five mineral pools...there's a pool to suit everyone's fancy. Even Baby Maelyn enjoyed her inaugural swim...and what a great place to test the waters. The outdoor pools are in a park-like setting...with a backdrop of mountains. During our stay at the hotel we saw it all...sunshine, sprinkles, and even a little snow...no Sasquatch this time, however!

Harrison Hot Springs has a rich history. During the gold rush, prospectors discovered the mineral springs on the southern shores of Harrison Lake. The first hotel was built at the present site in 1886 and named St. Alice Hotel...guests stayed for a dollar a night and paid 25 cents extra to bathe in the hot pools. The original hotel was destroyed by fire in 1920. In 1926 the Harrison Hot Springs Resort rose from the ashes...and was known as the 'Spa of Canada'. During the war, the resort was purchased by the Department of National Defence and used as a retaining centre for war casualties. After the war, it was totally refurbished and re-opened as a resort and spa in 1950. Since that time it has undergone many changes in ownership...and seen several additions. The present 'Healing Springs Spa' opened it's doors in 2001...and the hotel has spent 16 million dollars in improvements since that time. 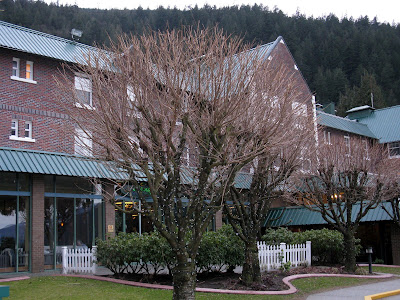 We stayed in the vintage part of the hotel...the wing that was built in 1930. They have for the most part kept the original style...and it's rather fun to step back in time on occasion. 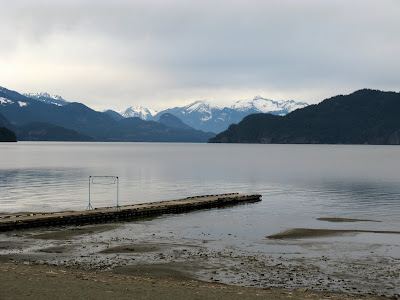 Once the kids had left for home, we went for a long walk. The water levels in the lake are the lowest we have ever seen! Yes...we had floods here not so long ago...but over the winter months we have had much less rain than is normal. 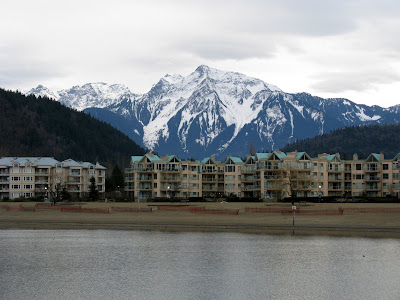 The water would normally be up near the snow fences that can be seen on the beach. 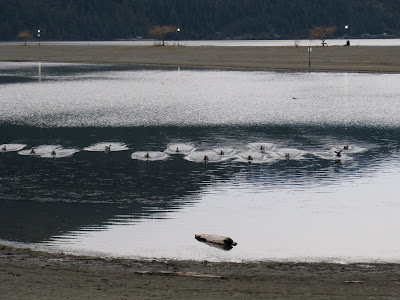 A flock of geese came in for a landing as we strolled by. 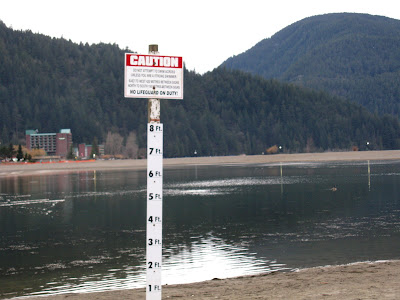 This post...which stands high and dry on the beach...is the marker for swimmers in the summer months. Never have we seen it on a bare beach! 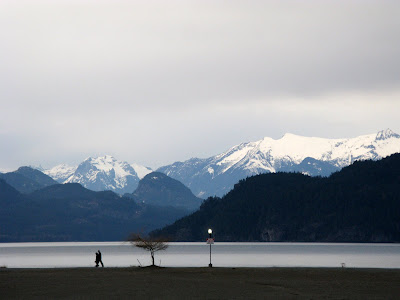 We weren't the only ones out and about...strolling around the lagoon.
As you may or may not know...Harrison Hot Springs is also home to the famous Harrison Lake Sandcastle competition. Their wonderful sand beaches are apparently perfect for building castles in the sand. Local residents may not have quite the same enthusiasm for their lovely sand...after experiencing the worst sand storms in 50 years over these past few months. 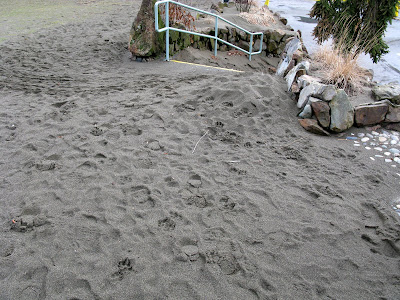 Where pedestrians would normally walk on sidewalks near the beach...they now walk on sand. 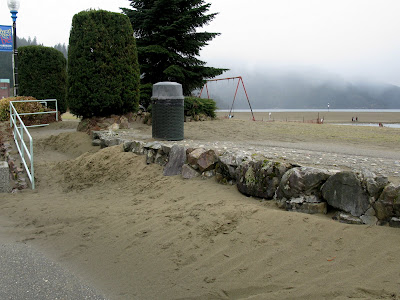 The railings marking the spot where steps once rose from the street...are now obliterated by sand dunes. The rock walls are hidden behind sand drifts...for the most part...along the entire stretch of beach.

We wondered when the clean-up would begin...and imagined what a huge job that would be!

Yesterday morning...as we were about to leave for home...we noticed the monumental task had begun! 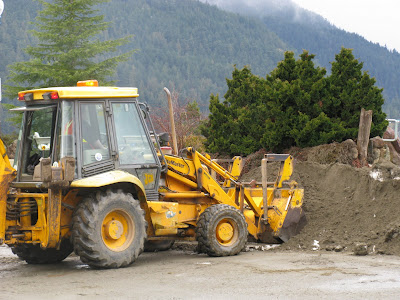 The loaders were moving the big sand piles...but there are some jobs that only a real man can do. 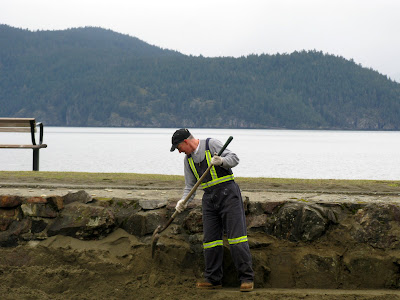 Here's one guy who will be very sore after a day spent shovelling sand...and it looked like it would be many days before the task was done.
It was a good time...the memories are sweet. I always look forward to visiting Harrison Hot Springs...and I'm thinking I will be back there before too long!