when they pull the plug...

So what exactly do you do when the lights go out? I was just finishing up lunch yesterday when the power went off. The coffee was still hot and the conversation was still good...but once lunch was over...reality set in. I could not go back to my work in the office...the Revenue Canada web page had long since disappeared!

I decided to call B.C. Hydro and inform them of our outage. Oops...the cordless phone was not working...nor was the office phone working... 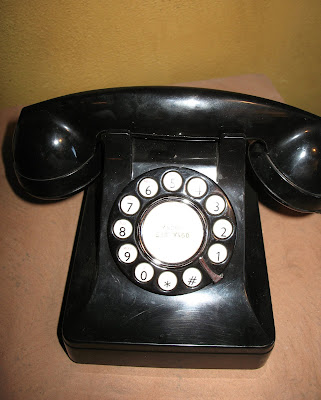 ...but I did manage to find a bedroom phone that was just a plain old-fashioned no-frills phone...with a dial tone. (It wasn't actually the phone in the picture...but I wish I still had one of those!) So, after being informed that the power would be off for a few hours...I tried to think of things to do that didn't require electricity. Hmmm...I came up blank! Well, I could always make phone calls...from the bedroom. And so I did. The numbers I needed were on the computer...but I found I still knew how to look them up in a phone book. Several times during my phone conversations, I ran to the office for the required information...and returned to my wired down phone. This was far too much work!
Well...since I was in the bedroom anyhow...and I had a drawer full of books waiting to be read...why not just take a reading break until the power was restored? Just as I was contemplating which book to crack open... 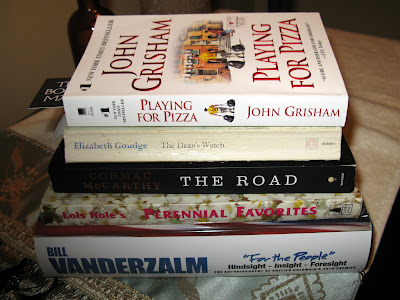 ...the power came back on! It looks like the books will have to wait for another day...but I'll show you the options. I keep books in my nightstand...though I'm not sure why, because I don't do a whole lot of reading in bed.
At the top of the pile is a John Grisham book...and now that I'm reading the jacket, I know why I haven't yet read a Grisham book that's been out there for more than a year! It's about football...and I could think of other topics I'd sooner get into.
Next is an Elizabeth Goudge book called "the Dean's Watch"...which I have started...barely. Elizabeth Goudge writes historical novels...'enchanting and something of a fairy-tale' so it says on the back.
Then is "The Road" by Cormac McCarthy. I bought the book after seeing the author interviewed by Oprah...and thinking it was the story of the love between a father and his son. I have never read it, since both my son and son-in-law informed me it was rather dark...and not likely something I would enjoy. Now I've put it back on my reading pile after having it recommended by trustworthy sources.
Lois Hole's 'Perennial Favorites' has been in my nightstand since we started landscaping almost four years ago. It's fun to spend a few minutes in her book now and again...there's always something to be learned from our Canadian gardening expert.
And at the bottom of the pile is a brand new book called "Bill Vanderzalm...For the People"...the autobiography of British Columbia's 28th premier (a most colourful character). It's a book I ordered for my dad...who happens to be one of Bill's greatest fans...and arrived complete with Mr. Vanderzalm's signature. But, if I treat it with the greatest of care...I should be able to preview it just a wee bit before passing it along.
So those are the books that I may...or may not...be reading sometime soon. The lights are back on...as is the dishwasher...the television...the computer...and all those blinking clocks that I need to re-set. The books will wait! But go over and visit In a Garden ...who is hosting a 'what's on your night table' show-and-tell this week.

Email ThisBlogThis!Share to TwitterShare to FacebookShare to Pinterest
Labels: books, minutia of life