what's in a name?

I wasn't named after anyone in particular...but was given a name that was very popular in the 1950's. Judith Ann was my official name...but at home I was known as Judy. 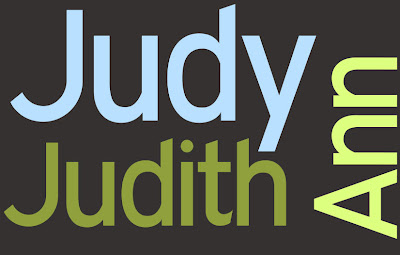 When I started school I realized just how popular that name was...there were three Judith Ann's in my class. The teacher assigned each of us with a different version for the year. One would be called Judy...one was Judith Ann...and I was known as Judith that year, and for most of my early school years.

My older sister was named Beverley...also quite common in those years. When I was seven years old, we moved to the farm where I now live...it was purchased from a family who also had a Beverley and a Judy. How coincidental is that?

I have met many Judy's through the years...but there haven't been any in my circle of friends for a long time. And so I go by Judy...no nicknames...no initials...no Judith. (Although...my sisters call me Jude for the most part.)

But I have a new friend named Judy...and although she lives far away...she visits me quite regularly on My Front Porch. And it seems some of you are thinking I am leaving myself the nicest of comments...since you have no idea there are more Judy's out there. So...just to clarify things...if I leave a comment anywhere from this day forward...it will say Judy ~ My Front Porch.

I should mention that I created my word cloud at a site called Wordle. You can have a lot of fun playing with words over there...and are free to use the graphics as you choose.

And that's it for earth-shattering news from My Front Porch today. Have a wonderful day!