When a CBC news van shows up at my front porch...I would be more than willing to talk, right? A blogger always has a lot to say...and would jump at the chance to say it on the evening news...one would think. Not so. 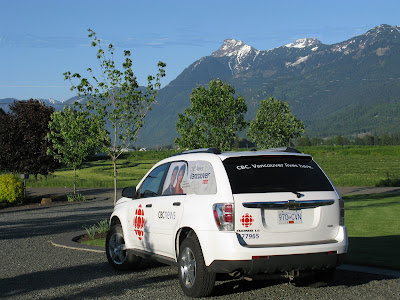 The CBC news crew did show up here yesterday afternoon...and when I saw the cameraman setting up...I voiced my strong objections. I had my opinions all right...and I saw what was happening on the freeway next to our farm...but there is no way I would go on camera and tell all of Canada about it. Give me a keyboard and a computer screen and I'll talk...there's always the option of deleting if it doesn't come out right the first time. After a little begging and pleading on their part...the nice people from CBC realized they wouldn't be getting an interview from me.

Yesterday was rather like a 'hot day in July' over here...with sizzling temperatures...and not a good day to be stuck on a freeway...going no where. A serious traffic accident involving a semi-truck shut down the Trans Canada Highway adjacent to our farm again yesterday. 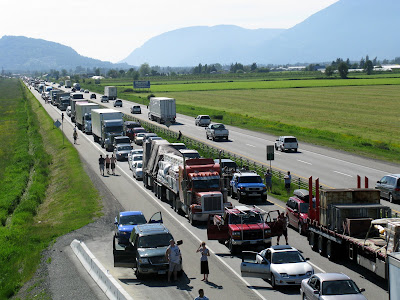 All afternoon the vehicles were stationary...and sometime mid-afternoon the CBC News crew arrived and set up just down from our place to get a piece of the action inaction. It is becoming a rather too frequent occurrence...with MVA's shutting the freeway down for hours at a time. 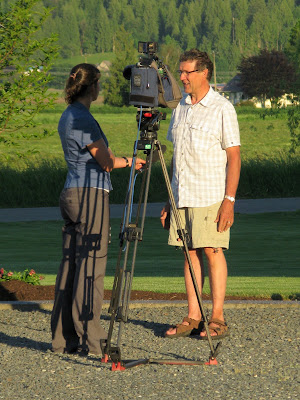 The people from CBC never totally struck out at our place though...the farmer drove into the yard just as I was sending them packing. He was more than willing to give them a piece of his mind...and so he did. I had to stay up to watch the late news last night...just to hear what he had to say.
I don't usually post on Saturday...but it's not every day I turn down an offer from the CBC...so I just had to post it...for the record. To all of you who are out and about on the roads this weekend...may you have safe travels...and may you arrive at your destination in good time!
Enjoy your weekend...

Email ThisBlogThis!Share to TwitterShare to FacebookShare to Pinterest
Labels: life on the farm, view from my front porch