There seems to be a blog theme happening on Wednesdays...and so I thought I would join in the chorus this week...and share a secret or two about a wonderful woman that I know. 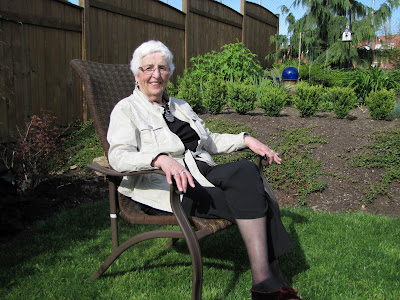 Her name is Hilda...and she happens to be my sister's mom-in-law...and lives in faraway Winnipeg. I met her for the first time more than three decades ago...and once or twice a year since that time. 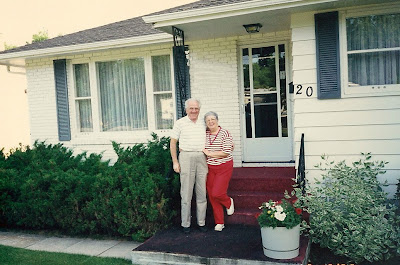 For most of her married life, Hilda and her husband lived in this pretty bungalow on the banks of the river. I had the privilege of visiting her here several times...and will always remember her beautifully set table...and tea parties extraordinaire! She is a most sentimental person...and has family heirlooms...and keepsakes galore. And her stories...had us all laughing and crying with her.

My most memorable visit is the one in 1992...when we four sisters flew out to Winnipeg for a cousin's wedding...and stayed for night at Hilda's B & B. Her hospitality went far beyond anything that could be expected...even including sleepwear for the guests. That's right...I slept in Hilda's nightgown that first night...since the airlines somehow left my luggage in Saskatchewan...or somewhere else enroute. She likes to call us sisters 'her girls'...and we don't mind one bit...but I think I'm the only one of 'her girls' that has ever slept in her nightgown.

Over the years we have had many fun times together...in B.C. and in Manitoba. I also have a collection of little gifts from Hilda...coasters, candy dishes, candles... 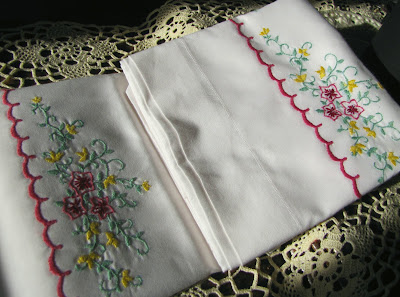 ...and some 'not so little', like a set of hand-embroidered pillowslips that she gave me for Christmas several years ago. She is a kind and generous woman...funny...emotional...and one who loves her family above all else.

She was out here over the past weekend...as her grandson was graduating from Columbia Bible College with a degree in worship arts. I sat with her at the CBC spring concert on Friday night... 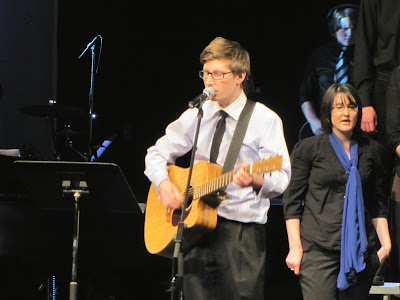 ...and she cried as she said it was so worth making the trip just to see Jamison up there singing his heart out. Oh...and to see him with a haircut and all dressed up...that was almost more than she could take! She cried...I laughed. Jamison happens to be my nephew...and I wish him all the best as he pursues his love of music and seeks to be where God wants him to be.

Hilda has returned to Winnipeg...because there happens to be a party there this weekend that she wouldn't want to miss. Does she look like someone who could possibly be the guest of honour at an eight-fifth birthday party? She is 85 years old...and most excited to be celebrating it together with family and friends. She had the guest list pared down to 70 people...but I suggested she should just invite a few more and make it 85. I'm sure it will be a most memorable celebration!

Though Hilda won't likely be reading this post...here's a verse I would like to give her on the occasion of her 85th.

For I know the plans I have for you declares the Lord, plans to prosper, not to harm you, plans to give you a hope and a future. Jeremiah 29:11

The future may look a little scary when you are 85 years old...but Hilda knows who holds her future...and my wish for her is to walk into it with confidence.
Happy Birthday to a wonderful woman in my life!