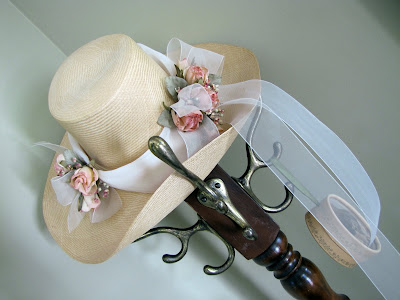 It's Wednesday...and I have another wonderful woman that I would like to pay tribute to today. We go back a long way...although she likely has no recollection of me from some five decades ago. I was just one of a hundred students who attended our local country school...where she was the school janitor...and knew us all by name. She lived across the road...though it seemed she was always at the school. I don't recall her wearing a hat on the job...but I can still see her in her work dress....a smile on her face and a kind word for every student. That's how I knew her then.

Now I know her in a different way. She is the lady who always wears a hat...walks with a purposeful gait...exudes enthusiasm, vitality and JOY. Oh...and she still always has a smile on her face and a kind word to those she meets...some things haven't changed. She will be 97 years old this summer...and I see her in church on Sundays. And as I was thinking of doing a post about Selma...I realized I had no photos. Until... 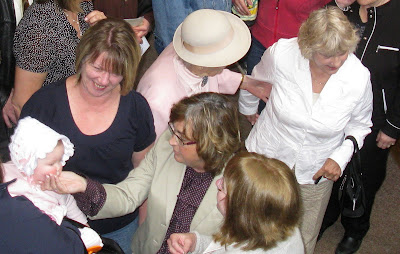 ...I looked through my files and found a picture of a crowd in the church lobby on a Sunday morning. There in the middle of the crowd...was a lady in a hat...none other than Selma. 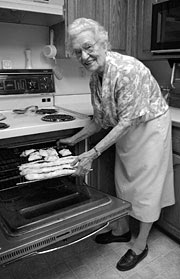 And then I borrowed this picture from another publication that featured an article about the lady who bakes 'pie by the yard'. That would be her! She is always sharing gifts from her kitchen. Three years ago we hosted a conference at our church...with more than 500 people in attendance. Though the food had all been pre-arranged...a large supply of piroshki arrived fresh from the oven as the conference began. Bakery bought goodies could not compare...and soon everyone was wondering who had supplied the light, flaky fruit pastries. It came as no surprise to me that it was Selma...who never quits giving to others.

“I just love to bake,” says Selma Fleming. “I’m so grateful to God for his goodness and for allowing me to enjoy what I do.” She bakes regularly. She bakes generously. She usually gives away seven of the eight delicious multi-grain loaves of bread she makes in a normal-sized batch.

Sometimes people leave a sack of flour or sugar outside her door – whether as a thank you, or to encourage further baking, she doesn’t know. Neighbours also bring vegetables for her homemade soups.

Selma loves God...believes in prayer...and has joy in her family. She spreads her joy around. What a wonderful example she is to all who have had the privilege of knowing her.

Have a wonderful Wednesday...

(words in italics taken from featured article)
Posted by Judy at 5:00 AM