a bus trip to remember...

So why would anyone actually want to take a bus trip? My bus riding experience was mostly limited to riding a bright yellow bus to school… 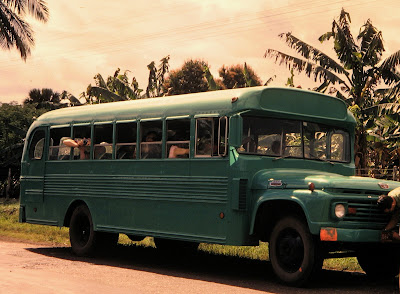 ...or this lovely seafoam green specimen on a missions trip in the West Indies in the early 70’s. Bus rides were for school children and seniors! That was my thinking…until I took a surprise bus tour that threw that theory out the window.

It was a normal west coast January evening…and the plan was to go out for dinner with friends. Hubby had made all the arrangements…and our friends were stopping by to pick us up. But they were a little late…and then I heard the ‘milktruck’ coming down the barn driveway. Strange…the milk was usually picked up late at night. Next thing I knew…the ‘milktruck’ was honking in front of the house. Hubby said, “Let’s go…I think they’re here.” Suddenly I knew he was up to something…and I wasn't so sure I wanted to find out what! Sitting outside my front door was a state-of-the-art tour bus….and the passenger door opened as I approached. By now I was totally taken aback…but hubby insisted I get in. 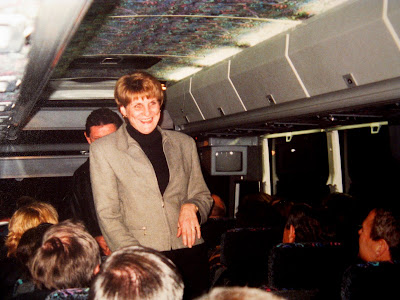 Surprise! Inside were about 50 of my nearest and dearest friends and family. They all yelled “surprise” and I stood there dumbfounded! Soon we were off on a trip to “who knows where”. I don’t think anyone knew exactly where we were going…but someone suggested maybe Las Vegas. As it turned out…our destination was a quaint little restaurant on the other side of the river for a fiftieth birthday celebration. My kids had arrived earlier to decorate the room…hubby had made arrangements for the dinner…and we had us a party. The bus driver came and joined in…after all, fiftieth birthday celebrations are few and far between! 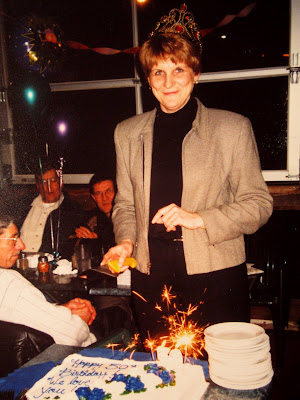 And when the party was over…it wasn’t really over…since we all got to ride that fancy bus together one more time. Reclining seats, overhead television screens, and spa music...it was all a far cry from the buses of my past! Here’s what I know to be true…the journey can be as much fun as the destination. Hop on a bus with some friends and find out for yourself!

All this happened on January 19…just a few years ago (well, quite a few, actually!). Don’t you think I have the most creative husband? He decided that for my inauguration into ‘old-age’ I should go on my first senior’s bus trip. Although, it wasn’t really on my wish list of things to do…we had us a fun time! I’m still wondering how many cows he sold to pay for the evening…but he’s not telling.

It’s January 19 again…and I’m not planning on going on any bus rides today!

PS Another good reason to celebrate today...Jeremy is definitely on the mend. We are hoping he will be home from the hospital in short order!
Posted by Judy at 6:00 AM