what's with the thermos? 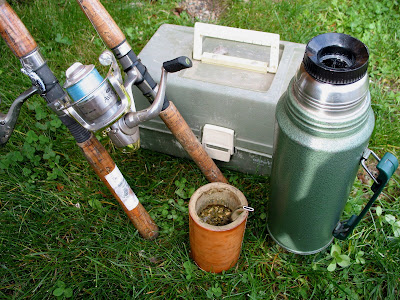 For all of you who have been wondering why a green thermos...and a sippy cup...show up on my photos on frequent occasions, today I am letting you in on the secret.

It is a well-known fact that my beverage of choice is coffee...that and water and I'm a happy camper. When my son-in-law, Tim, arrived on the scene some years back...though very polite about it, he didn't seem overly enthused with the coffee I generously poured for him. Before long he was bringing his favorite beverage with him....in the signature thermos that still travels with him wherever he goes.

So what exactly is yerba mate? I did a little research these last few days...and I am quite willing to share my newly acquired information.
Yerba mate is a shade subtropical tree of the holly family with evergreen leaves...grown in South America, and most widely cultivated in Paraguay. The infusion called mate is prepared by steeping the crushed dry leaves and stems of yerba mate in hot water, rather than in boiling water like black tea. Known as 'the drink of the gods', it possesses a multitude of health benefits...it boosts immunity, controls the appetite, reduces stress and eliminates insomnia...to name a few! It is a slightly more potent stimulant than coffee and much gentler on the stomach (so says wikipedia). Drinking mate with friends from a shared hollow gourd or bull's horn (called a guampa in Spanish) is a common social practise. 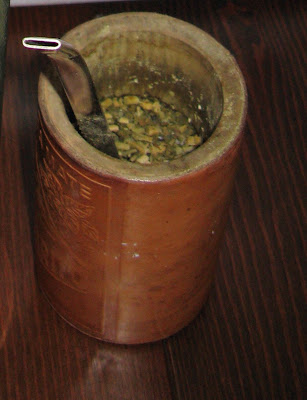 I'm not really up on the fine art of making a perfect infusion of mate...but it seems one fills the guampa about half full of yerba leaves...adds hot water and allows several minutes for the brewing process. The mate is then sipped through a bombilla (silver straw), which has a sieve on the bottom to strain out the loose leaves. The entire drinking apparatus looks a little suspicious to me! I think I would prefer my yerba leaves in a tea bag...steeped in my favorite teapot and served in a mug.

It seems Tim began this social ritual of sipping mate in college...with his buddies. Despite his best efforts, he hasn't had much luck in finding that social mate-drinking companionship in our household...although Kris joins him on occasion. I just have never seen anything that appealing about a drink that smells like baled alfalfa...and definitely can't get exciting about drinking from a shared gourd. But now that I have all this new information about Tim's healthy drink of choice...I might even be convinced to try it. (Did I mention that it is used to boost metabolism...and that it increases vitality and longevity?) Maybe a little sip...just once...and out of nice coffee mug! 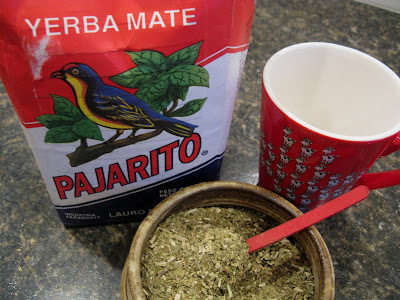 So, there you have it...Yerbe Mate 101! And since it is becoming increasingly popular in North America, a little information might not be a bad thing.
Have a great day...