watching the world go by....

Sometimes it's just nice to sit on the sidelines and watch the world go by for a spell! 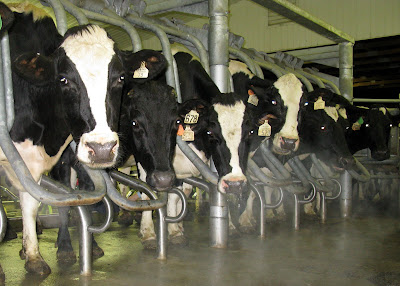 These gals have it all figured out...they mostly just await the next meal...or their twice daily trip through the parlour. It's the life of leisure, really!

But for those who look after their every need...things sometimes get a little overwhelming! What with floods...and our faithful milker off last week with an injury...there was no way that the bosses would be getting any time off right about now. So Jeremy resorted to the extreme...and is in hospital with double pneumonia right now. He will be watching the world go by from the sidelines for a spell...unwillingly, I might add! And back at the ranch, we are scrambling to keep things going. Our injured worker is limping in to work today...while awaiting knee surgery. We will be treating her really well! Once again, I'm so thankful we are not off on vacation right about now.

In other news...Lellow (my daughter's baby boutique) celebrated it's 1st anniversary with a big party over the weekend. They have had a great first year, and wanted to thank their many faithful customers. 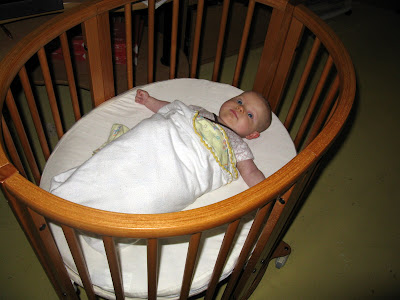 I popped by to check out the festivities...and found Maelyn quite content to be on the sidelines...watching the world go by. She loves going to work with mommy...it's her kind of place!

We also made a Costco run over the weekend...Maelyn, Mommy & I. Truth be told, Maelyn had no idea where she was... 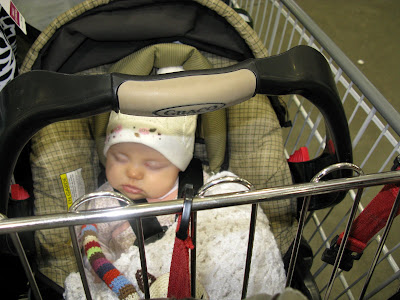 ...since this is her idea of shopping! I'm sure she would feel the same way about Mommy's staff meeting this morning...so she is being sidelined to Grammy's house. We'll have us a little fun.

And if you think of it...I'd so appreciate your prayers on behalf of my son who's been sidelined for a spell...and is a very sick guy!

Email ThisBlogThis!Share to TwitterShare to FacebookShare to Pinterest
Labels: family, grammy's page, life on the farm