The cast iron skillet makes a come back!

Somewhere down the line my cast iron frying pan fell out of favour...and eventually I thought I could live without it. But I've been missing it lately...especially when I would see such wonderful recipes out there in blogland that could only be cooked in grandma's old cast iron skillet. I finally bought myself a brand new pre-seasoned cast iron pan...and now I've got lots of recipes waiting to be tried. 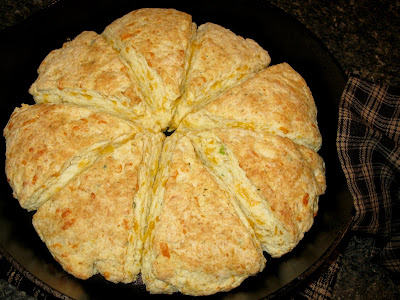 Yesterday was a soupy kind of day...and with cauliflower cheese soup on the dinner menu...I decided to try baking scones in my new skillet. There's nothing quite like fresh baked breads to go with soup. Scones take only minutes to mix...and in half an hour they are ready to be served. And with a spanking new pan...why not serve them right from the skillet? 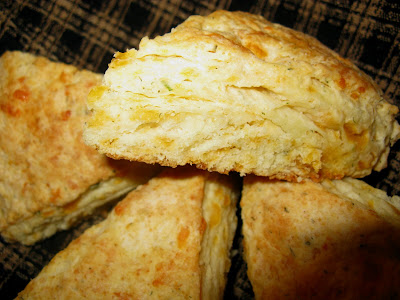 If you are interested in trying Savory Cheddar Scones...just jump over to our MGCC on-line cookbook where I posted the recipe last night.

So...although my cast iron skillet has made a comeback...it is on quite a part-time basis. I have a ceramic cook top...and cast iron is not the recommended cookware. Cooking outside on my gas burner isn't too appealing these days. But for now...I am enjoying my new cast iron baking pan!

After three weeks of accumulated snow...we are now having heavy rains...and facing the threat of flooding. Enjoy the day...and don't wash away!